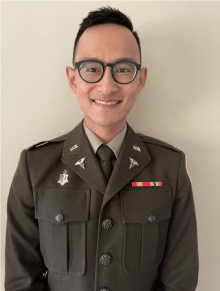 Michael Sun was born in Columbus, Ohio but was raised in Glastonbury, Connecticut. He completed his undergraduate degree in 2018 with a BA in Biochemistry at Washington University in St. Louis. During this time, he ran club Cross Country and Track, and helped lead the team to numerous national championships and Division III national champion team titles.

In 2018, he was commissioned in the rank of Second Lieutenant in the United States Army Reserve in the Medical Service Corp as a Health Professions Scholarship Program recipient and started medical school at the Oakland University William Beaumont School of Medicine.

In May of 2022, he was promoted to the rank of Captain in the United States Army Medical Corps and started his training in Neurosurgery at the University of Florida. He is scheduled to complete his residency in 2029. His neurosurgical interests include spine and pediatrics. Michael is dedicated to mentorship and education of medical students and pre-medical undergraduates.

In his free time Michael continues to run and is a passionate rock climber. His rock climbing adventures have led him to climbs all over the United States and even a summit of Mount Kilimanjaro, Africa’s highest peak at 19,341 feet above sea level. He aspires to become an American Mountain Guide Association certified instructor.