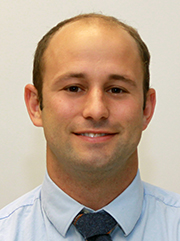 Ken Porche, MD was born and raised in Southern Louisiana where he attended Louisiana School for Math, Science and the Arts. He attended Rensselaer Polytechnic Institute (RPI) where he received a B.S. in Biochemistry and Biophysics and minored in Mathematics as well as Brain and Behavior. As an undergraduate, Dr. Porche worked on a variety of projects including cancer cell research, protein structure research, and computational modelling. Upon graduating he stayed at RPI to continue research on molecular motors.

He received an M.A. in Medical Science from Boston University School of Medicine with his thesis on fMRI data in adults with autism spectrum disorder (ASD). Concurrently, he was hired as data manager at Boston Children’s Hospital working with genetic abnormalities associated with ASD (the Simons VIP study).

He began his neurosurgical training at the University of Florida in 2017 and is scheduled to complete the program in 2024. His interests in neurosurgery include skull base surgery and neuro-oncology.

Outside of medicine, he dabbles in woodworking, building tables of his own design. He also enjoys long distance running, snowboarding, and Cajun cooking.