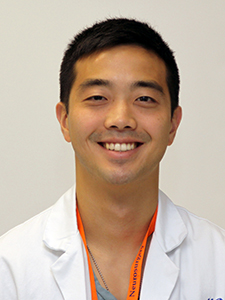 David Shin, MD was born in Durham, NC and raised in Rochester, MN. He attended Columbia University, graduating with a BA in Biology and a concentration in Psychology in 2011. During his time in New York City, he received certification as an EMT-B and was actively involved with the on-campus ambulance corps, Columbia University Emergency Medical Services.

Upon entry to the University of Minnesota Medical School in Minneapolis, MN, he received a commission through the United States Army Reserve as a Second Lieutenant in the Medical Service Corps to pursue his medical education. During medical school, he was elected to Alpha Omega Alpha and assisted in the development of the Minnesota Hand Function Test, a novel quantitative touchscreen-based assessment of upper extremity function.

In May 2015, he received his medical degree and was commissioned as a Captain in the United States Army Medical Corps. He was then stationed in Gainesville to pursue training in neurosurgery at the University of Florida and is scheduled to complete his training in 2022. His neurosurgical interests include deep brain stimulation and neurocritical care. His hobbies include running, biking, wakeboarding, playing the violin, the continuous disappointment of all Minnesota sports, and competitive video gaming.