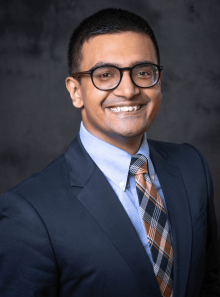 Danyas Sarathy was born in Bangalore, India and shortly thereafter, moved to Northern Virginia where he was raised. He received his undergraduate education from the Pennsylvania State University, completing a B.S. in Physics, magna cum laude, as a Schreyer Honors Scholar for performing research on the use of mathematical models and graph theory to model cell-adhesion pathways. He was active in collegiate Judo throughout his undergraduate education. He returned to Virginia to complete his medical education, graduating from the University of Virginia School of Medicine. While in medical school, he performed research in both spine and vascular neurosurgery. He began his neurosurgical training in 2022 and is scheduled to complete the program in 2029. He is interested in all aspects of neurosurgery, with a special regard for open and endovascular neurosurgery. In his free time, Danyas enjoys learning Spencerian calligraphy and exploring the outdoors with his significant other, Alyssa and Australian cattle dog, Link.