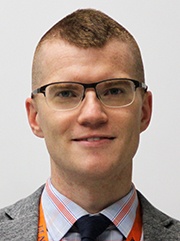 Brian was born in Albany, NY, and raised in Clifton Park, NY. He attended The Johns Hopkins University in Baltimore, MD, majoring in biophysics with special concentrations in physical chemistry and applied math. He received the Ben and Fortuna Iseman-Klotz Memorial Scholarship during his junior and senior years, and in 2009 was inducted into the Phi Beta Kappa honor society.

In March 2009, he was commissioned in the grade of Second Lieutenant in the Medical Service Corps of the United States Army Reserve. He received the F. Edward Hebert Scholarship, and attended Tufts University School of Medicine in Boston, MA, where he was elected into the Alpha Omega Alpha medical honor society. Before graduating from medical school in 2013, he received the David L. Kasdon award for outstanding achievement in the neurological sciences and neurosurgery.

In May 2013, he was commissioned in the grade of Captain in the United States Army Medical Corps. He was then stationed in Gainesville to pursue active duty training in neurosurgery at the University of Florida. He is scheduled to complete his residency training in 2020. In his free time, he is an avid long-distance runner and soccer fan. He also enjoys rifle sports and baking pastries. His clinical interests in neurosurgery include traumatic brain injury, neurosurgical critical care, skull base surgery, and open and endovascular surgery. Brian is also dedicated to medical and pre-medical education and mentorship.