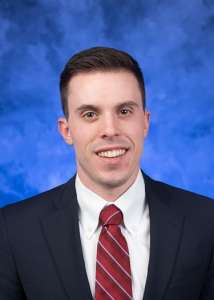 Carlton was born in Boca Raton, FL and raised in Willow Street, PA. He attended Franklin and Marshall College in Lancaster, PA, majoring in neuroscience and minoring in chemistry. During his senior year he was inducted into Phi Beta Kappa honor society.

In February 2015, he was commission in the rank of Second Lieutenant in the United States Army Reserve in the Medical Service Corp. He attended medical school at The Pennsylvania State College of Medicine in Hershey, PA where before graduating from medical school he was awarded the Tarik F. Ibrahim award for excellence in neurosurgery.

In May 2019, he was promoted to the rank of Captain in the United States Army and his current active duty station is in Gainesville, FL to train as a neurosurgeon at University of Florida Health. He is scheduled to complete his residency in 2026. Carlton during his free time enjoys running and playing his violin. His clinical interests include traumatic brain and spinal cord injury, as well as open and endovascular neurosurgery. Carlton is dedicated to medical and pre-medical education and mentorship.