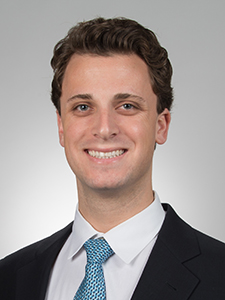 Immediately after college, Dr. Dru worked for the then small cap genetic sequencing company Illumina Inc., in La Jolla. During that year, he applied to medical school and matriculated to the University of Arizona College of Medicine-Tucson, graduating in 2015.

During medical school, Dr. Dru pursued research over a wide array of topics, from the molecular genetics of cerebral cavernous malformations and the pharmacophysiciology of spinal fusion, to anorexia nervosa in pediatric psychiatry patients.

Dr. Dru was elected into the Alpha Omega Alpha Medical Honor Society as a junior, and served as the chapter president. At the 2015 UA awards convocation, Dr. Dru was the co-recipient of the Outstanding Senior Award for graduating at the top of his class.

Dr. Dru began neurosurgical training at UF in 2015 and is scheduled to complete the program in 2022. His interests in neurosurgery include endovascular neurosurgery and minimally invasive spine surgery. Outside of medicine, Dr. Dru is an avid saltwater fly fisherman and tries to stalk the flats for bonefish, tarpon, and permit as often as possible. He also enjoys golf, skiing, and traveling.