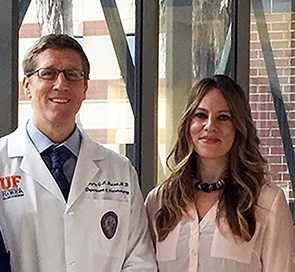 The University of Florida Residency in Neurological Surgery is a seven-year program. Following successful completion, trainees are capable of the independent practice of neurological surgery of the highest quality. During all years of the program, without exception, there is strict adherence to the ACGME duty hour’s regulations.

PGY I is the internship year. During six 4-week rotations as a member of the Neurosurgery team, the PGY 1 resident learns the fundamentals of evaluating and caring for patients with neurological illness, learns to assist in the operating room and learns the fundamentals of basic operative procedures all under the supervision of the faculty and senior level residents.  The PGY 1 resident learns additional fundamental intensive care skills during three 4-week rotations in the Neuro ICU. Additional airway, line placement, neuromonitoring and anesthesia skills are learned during one 4-week rotation on neuroanesthesia. Finally, three 4-week rotations of neuroscience, consisting of stroke neurology, general neurology, and Neuropathology. PGY-1 interns do not take night calls, although they do spend one 4 week block as the night float 1resident.

The PGY II and III are the junior resident years. The junior resident continues acquisition of knowledge and skills in the practice of neurosurgery through progressive increases in-patient care responsibility and surgical experience all under the direct guidance of faculty and senior level residents. Junior residents spend four 4week blocks on night float over the course of the two years, and otherwise take saturday call once every two months.  The resident plays a role in teaching the PGY I residents and medical students.

The PGY IV is the first senior resident year. This year is spent in pursuit of a research experience. The resident may pursue research opportunities under the mentorship of UF faculty or at extra-mural sites such as the NIH as desired. There are no night float duties as a senior resident.  Residents take 4-5 24 hour calls per month. The PGY V and VI years are further senior resident years.  In these years, the resident begins functioning in a leadership role as a service leader and in the operating room. Working with the attending surgeon, the graduated surgical experience is further expanded in preparation for the chief resident year.  Within this 2 year period, a minimum of 6 months of elective time are available and can be used to expand upon the research year, or pursue subspecialty training, such as enfolded fellowships.

The PGY VII year is currently the Transition to Practice year.  Due to changes in RRC requirements, for those residents entering the program in 2013 or later, the PGY VII year will become a chief resident year, and the PGYVI year will be additional elective and senior year rotations.  During this year, surgical skills are further expanded under the direct supervision of an attending surgeon. Administrative and leadership responsibilities are added, as the chief is the director of the services at the Shands at UF and the Malcolm Randall VA Hospitals. The chief residents serve as liaison to the residency program director, and are involved in didactic education as well as quality assurance in the hospital. The chief resident experience is designed to give the trainee the opportunity to hone his or her clinical skills in an independent but mentored environment.