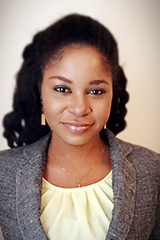 Sonisha A. Warren, a native of Jamaica, graduated summa cum laude from Florida Memorial University with a Bachelor of Science degree in Biology in May 2006. She was then awarded the Alumni Graduate Fellowship — exclusively offered to the top 10 percent of incoming graduate students each year — by the University of Florida College of Medicine (UF-COM) and relocated to Gainesville to pursue her graduate studies in biomedical research in 2007. During her graduate work as a cardiovascular research scientist, Sonisha used animal models to demonstrate the role of the then-novel protein “cardiac-specific myosin light chain kinase (cMLCK)” in the heart and cMLCK’s potential as a therapeutic target. Dr. Warren graduated in 2011 with a PhD in Medical Sciences, concentrating in Physiology and Pharmacology.

As a result of her passion and commitment to excellence, Dr. Warren has received numerous awards on her work, including the gold award at the UF-COM’s Medical Guild Research Competition — an esteemed scientific research competition held annually at the University of Florida featuring the leading medical science students. Dr. Warren has also published in leading research journals and, in 2014, one of her publications was named one of the Circulation Editors’ Picks for work listed among “…the most important manuscripts, as selected by the editors, published in Circulation and the Circulation subspecialty journals…on the topic of heart failure within the last year.”

In 2012,  Dr. Warren joined the Neurovascular division’s stroke research team, where she managed and coordinated several NIH- and industry-sponsored projects until 2017.