June 26, 2017, was the worst day of Gary and Carly Allen’s lives. It was the day their child, 2 1/2-year-old Lennox Allen, was diagnosed with an aggressive brain tumor.

Before the nightmare began, the couple were living an idyllic life. Gary Allen, D.O., a family medicine resident at UF Health Shands Hospital, was working hard to serve patients while taking care of a growing family. Carly was a stay-at-home mom for their two little boys, Austin and Lennox, with another one on the way.

It didn’t come as a surprise to the young family when Lennox began experiencing morning vomiting episodes. Their oldest, Austin, had also vomited frequently when he was young. However, Carly noticed that there seemed to be a pattern with Lennox. He would get fussy, grab the back of his head and then suddenly vomit.

Concerned about her son, Carly took him in for a pediatric check-up. Tests showed no signs of gastrointestinal problems, yet Lennox’s symptoms persisted.

On June 24, 2017, Gary came home from work and noticed that Lennox was walking unsteadily. Having studied signs of brain abnormalities in medical school, Gary knew that Lennox’s symptoms — including vomiting, headaches and an unsteady gait — were common signs that something was very wrong neurologically.

After sharing his concern with Carly, Gary took Lennox to the UF Health Shands Pediatric Emergency Room. Within an hour, while Lennox watched his favorite TV show, Paw Patrol, the emergency physician called Gary out into the hallway and gently broke the news. Lennox had been diagnosed with a large posterior fossa brain tumor. The physician told Gary that neurosurgery would be inevitable in the coming days.

In shock, Gary called Carly, who was shopping for groceries with Austin, to tell her the news. She ran out of the store, pulling Austin by one hand, crying and devastated.

“I went through the whole stages of grief, like denial and anger,” Carly said. “I had hope, but at the same time, I had totally no hope that things were going to go right. I was angry that this had had happened to him. We were heartbroken.”

Prior to Lennox’s impending surgery, the Allens discovered they had yet another hurdle to cross. UF Health was waiting for a new pediatric neurosurgeon, Lance Governale, M.D., to move with his family to Gainesville. Who then, would perform Lennox’s surgery?

After Lennox’s physician called Governale and explained the situation, the Harvard-trained pediatric neurosurgeon immediately agreed to fly to Gainesville early to operate on Lennox’s brain tumor.

“Dr. Governale, I love that man,” Carly said. “He flew in when he was supposed to be trying to help his family move from Ohio, and he came for Lennox to do the surgery. Several months later, we realized how important it was that it was him who did the surgery.”

After Governale completed the tumor resection, an intraoperative biopsy diagnosed Lennox with an atypical teratoid rhabdoid tumor. This rare form of pediatric cancer, commonly known as AT/RT, is fast-growing and typically found in children younger than 3 years of age. Because the tumor type is so uncommon, many physicians have never heard of or dealt with it, but Governale had.

“Dr. Governale was up-to-date with what AT/RT was and how important it was that he got the whole tumor,” Carly said.

The eight-hour surgery was a success, and Lennox was cleared to undergo the next stage of cancer treatment, which included intensive chemotherapy, stem cell transplant and proton therapy, under the supervision of UF Health neuro-oncologist Sridharan Gururangan, M.D. 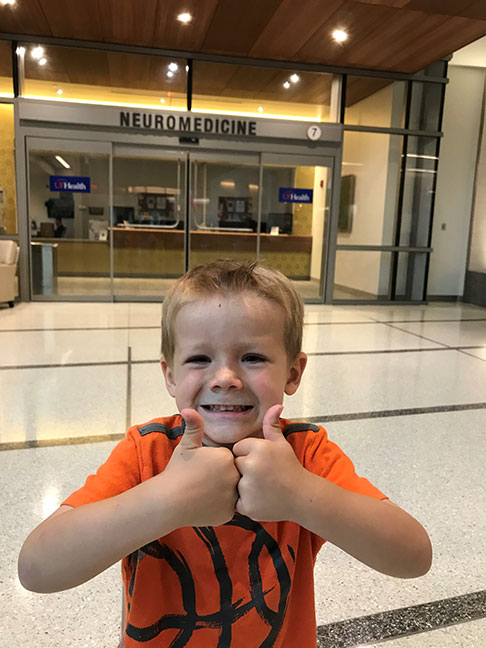 “Dr. Gururangan is one of those doctors who can present material to you with a tender spot,” Carly said. “He knows how to present the bad material, but then give you hope that there’s something that can be done about it. I’m grateful that there are people out there who dedicated their lives to studying such rare things like AT/RT, and that’s him.”

Lennox had to be hospitalized to receive his chemotherapy medications, meaning he would be in a hospital room for three weeks at a time. The drug also caused a variety of painful side effects.

“A lot of people ask me what he did while he was in the hospital,” Carly said, “But he was so incredibly sick, and he was only 2 1/2 during it. On his good days, he would get up and play with some of the volunteers or we’d take him on a wagon ride. But the majority of the time, all he wanted to do was watch YouTube Kids, and we didn’t really care because he was so miserable.”

Chemotherapy wreaked havoc on Lennox’s little body. His red blood cell counts fell, necessitating a blood transfusion, and then his white blood cells and neutrophils fell quickly after that. Lennox spiked a viral fever, which also caused terrible diarrhea. When his hair began to fall out from treatment, Gary shaved off the rest of it.

Through it all, Lennox’s soon-to-be little brother was growing quickly inside his mother’s womb and on Oct. 31, 2017, Darren Lee Allen was born at UF Health Shands Children’s Hospital. The Allens took the baby upstairs where Lennox was being treated, and the brothers met for the first time. That night, Gary went home to take Austin trick-or-treating.

On Dec. 12, 2017, the Allen family got their Christmas wish early, as Gururangan found no trace of AT/RT in Lennox’s body. While this was the news they were waiting for, Lennox had to continue treatment to decrease the chance for recurrence. He went to the UF Health Proton Therapy Institute where he received 28 rounds of radiation. On Feb. 5, he finally completed all treatments and was able to go home for good. Carly said their family owes it all to UF Health’s team care approach to cancer treatment.

“The team of them together, Dr. G (Gururangan) and Dr. Governale, it’s awesome that we have that at UF,” Carly said. “It gives pediatric patients with brain tumors a leg up.”

Today, Lennox is at home being a typical 4-year-old. He loves to play outside, draw and color. He loves his friends and teachers at the school he now attends, and he loves dinosaurs. Carly calls him “the happiest kid ever.”

Yet, life after cancer treatment isn’t always sunshine and rainbows. For a while, Lennox was tube-fed because the side effects from chemotherapy made him dislike eating. Today, however, he is eating on his own.

Lennox still has slight right-sided weakness and some speech delay after the tumor removal and receives therapy for both, but Carly could not be happier with his progress and achievements.

“So, what? Lennox has that right-sided weakness? So what?” Carly said. “He still has the same personality. He’s thriving. He’ll live a normal life despite all that he’s gone through. Lennox’s prognosis started with Dr. Governale, and he set him up for success.”

Now, looking back on her family’s experience with an aggressive childhood cancer, Carly is thankful for the care her family received and offers advice for other parents who may soon be facing the same painful experience.

“My biggest thing is you’re going to have to get help. No one ever wants to accept help, but at that moment I accepted everything because I couldn’t do it all by myself,” Carly said. “When it comes to the health care providers, trust that they know what they’re talking about and trust them. No one can prepare you for that awful day when someone tells you your child has cancer. No one can prepare you for that. It’s OK to cry. Ask questions and just let the doctors help you.”