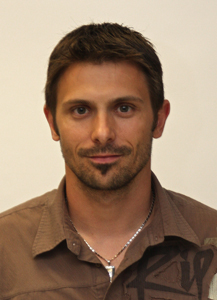 The rapid spread of a common and deadly brain tumor has been slowed down significantly in a mouse model by cutting off the way some cancer cells communicate, according to a team of researchers that includes UF Health faculty.

The technique improved the survival time for patients with glioblastoma by 50 percent when tested in a mouse model, said Loic P. Deleyrolle, Ph.D., a research assistant professor of neurosurgery in the UF College of Medicine.

Researchers focused on disrupting the cell-to-cell communication that allows cancer stem cells to spread. To do that, they targeted a channel that cancer cells use to transfer molecules. By cutting off their communications pathway, the deadly cells stay in check, Deleyrolle said.

Eight UF Health researchers took part in the study, which was co-authored by Deleyrolle and published recently in the journal Cell Reports. They collaborated with researchers at the Cleveland Clinic and the University of California, Berkeley.

Glioblastoma is the most common brain tumor in adults and there is no effective long-term treatment and patients usually live for 12 to 15 months after diagnosis, according to the National Cancer Institute. Glioblastoma tumors, which are highly malignant, typically start in the largest part of the brain and can spread rapidly.

The research focused on connexin 46, a protein that is an essential component of cancer stem cells. Connexin 46 is part of intercellular channels known as a gap junction. That intercellular channel, which allows cells to exchange molecules and ions, is crucial to the growth of a glioblastoma tumor, researchers found.

“When we shut down those channels in the cancer stem cells, we can significantly reduce the tumor-forming abilities of the cells,” Deleyrolle said.

While the technique has yet to be tested in humans, Deleyrolle said the implications are clear and relevant. For now, a glioblastoma patient can expect to survive about 12 to 15 months. Patients can also develop a resistance to temozolomide when it is used for chemotherapy, further shortening their life expectancy.

“Any significant increase in survival time will be a meaningful improvement because the current treatments provide only weeks of efficacy” Deleyrolle said.

Another reason for optimism: All of the compounds that were tested as inhibitors are being used in humans or are in the clinical trial pipeline. Carbenoxolone is used in some European countries to treat ulcers, and 1-octanol is used as experimental treatment for tremor in the United States. That means that the amount of time needed to get the drugs into a clinical trial as a therapy for glioblastoma could be significantly shortened, Deleyrolle said.

Because gap junction inhibitors have ubiquitous functions in many organs and tissues, one of the next research steps is to determine the inhibitors’ most effective and tolerable concentrations. It is also necessary to understand more about the mechanisms that make the inhibitors work, Deleyrolle said. Still, clinical trials could begin within a few years, he said.

Treating glioblastoma is especially difficult because its cells can vary drastically, even within a single tumor — so breaking the chain of cell-to-cell communication is yet another potential weapon to fight the disease. If the new therapy is approved following a clinical trial, Deleyrolle said it would likely be put to use alongside traditional chemotherapy and radiation treatments.

Deleyrolle said he is seeking a new federal grant to continue translational research.

“When it comes down to treating such a complex disease, there isn’t one magic bullet. You have to come up with complex, multiple approaches, he said.

This study was supported by grants from the American Cancer Society, the National Institutes of Health, The Sontag Foundation, the Lerner Research Institute and the Florida Center for Brain Tumor Research, among others.