A common booster vaccine could improve the effect of a vaccine aimed at treating a type of brain tumor, leading to improvement in patient survival, according to research published today (March 11) in the journal Nature.Vaccine therapies have been increasingly used to treat different types of cancer, including glioblastoma. In glioblastoma — the most common and most lethal form of brain tumor — the team, which included researchers from Duke Cancer Institute and University of Florida Health, targeted a common virus called cytomegalovirus. The virus is present in glioblastoma tumors, but not in surrounding brain tissue. 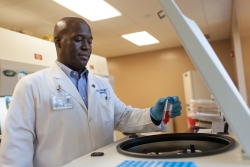 “We saw a two- to threefold increase in dendritic cell migration to lymph nodes in the group that received a booster shot,” said Mitchell, also director of the UF brain tumor immunotherapy program. “The survival in patients who received the vaccine and booster also was significantly longer than those receiving the vaccine alone.”

The trial included 12 patients, half who were randomly assigned to receive the tetanus/diphtheria toxoid booster vaccine and half who received a different vaccine preparation. The researchers did not know which treatment patients received. Three of the six patients who received the tetanus booster with their dendritic cell vaccine were alive at the time of analysis, with survival times from their diagnoses ranging between 57 and 106 months — including one patient whose tumor shows no sign of progression and who is still living eight years after treatment.

“Patients with glioblastoma usually survive for little more than one year. However, in patients who got the immunotherapy with tetanus, three of the six patients lived nearly five years or longer, so the findings are promising and significant,” said senior author John Sampson, M.D., Ph.D., chief of the division of neurosurgery at Duke University Medical Center.

This one-two punch vaccine technique may also be applicable to other types of cancer as well as immunotherapies for other types of diseases, Mitchell said.

“This is an approach that should be applicable to other cancer vaccines and potentially even vaccines targeted at chronic infectious diseases,” Mitchell said. “Using the immune system to attack cancers has always had an appeal because the immune system is very specific and can target tumor cells without targeting normal tissues. Traditionally, it has also been well-tolerated by patients with very little side effects.”

The researchers think that activating the immune system’s recall response — or its ability to recognize and respond to something it has encountered before, such as tetanus — helped it also recognize the new tumor vaccine.

“We’ve known for some time that when we inject these cells, typically less than 1 to 5 percent of dendritic cells actually make it to their target,” said Mitchell, also the endowed cancer research chair at the Evelyn F. and William L. McKnight Brain Institute of the University of Florida. “In this trial, we were able to enhance the ability of these cells to make it to the lymph nodes.”

After the small trial, the researchers went back to the laboratory to analyze their results in animal models. In the animal studies, they confirmed the ability to increase the number of dendritic cells that reached the lymph nodes as well as to dramatically increase suppression of tumor growth. The researchers discovered a new role for an immune signaling protein called CCL3, which had not yet been associated with ushering dendritic cells to the lymph nodes. The protein also was found to work systemically, not just at the injection site, according to Duke researchers.

“While dendritic cell vaccines have shown some promise in the treatment of patients with advanced cancers, including glioblastoma, the dynamics of this process have not been well-understood,” Sampson said. “Our work identifies an immunologic interaction whereby recall responses to one antigen — tetanus — can influence the migratory capacity of dendritic cells loaded with different antigens — cytomegalovirus.”

Now, the researchers are working to confirm their results in a larger clinical trial.

Science writer for UF Health. Morgan writes about the research of faculty physicians in the College of Medicine. She joined the UF Health staff in 2014.