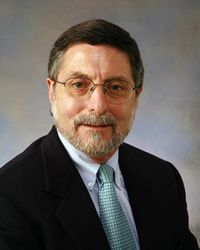 GAINESVILLE, Fla. — The 2014 Technology Showcase, A Celebration of Innovation, held on Thursday, March 13, 2014, recognized some of the best and brightest researchers, serial entrepreneurs, and leaders to conduct business involving University of Florida inventions.
This year’s showcase drew more than 300 attendees, including venture capitalists and executives from successful UF startup companies who participated in a panel discussion on alternative funding sources, heard pitches from UF startup companies, and browsed new technologies developed at the University of Florida.
The university’s impressive record of technology commercialization places it among the top institutions in the world. Eighty-nine UF researchers had technologies that were licensed or optioned in calendar year 2013 and the inventors’ reception at the annual showcase is a formal venue for recognizing these individuals’ important contributions.
At this year’s showcase, Dr. Frank J. Bova was named Inventor of the Year for 2013. In his 35 years with the University of Florida, Dr. Bova has submitted 27 disclosures that have led to 11 licenses or options. The technologies developed by Dr. Bova and other UF researchers can form the basis of new companies that fuel the innovation economy.
In the last 12 years, the UF Office of Technology Licensing (OTL) has launched more than 140 biomedical and technology startup companies. Last year, UF OTL ranked fourth in startup formation among all universities nationwide.
“Technology-based startups require more than a great idea to succeed,” said David Day, Assistant VP and Director, Office of Technology Licensing. “They also require leadership by talented entrepreneurs who have the business knowledge needed to move discoveries from the laboratory to the marketplace.”
Mr. Richard Allen, who accepted the S. Clark Butler Award at the 2014 Technology Showcase, has more than 30 years of experience doing exactly that. He is CEO and co-founder of Xhale. Mr. Allen has launched several medical device companies (including RTI Biologics and Axogen) and two venture/investment firms.
A special award was also presented to Dr. Win Phillips for being “The Guy Who Made It All Happen.” Dr. Phillips served as Dean of the College of Engineering from 1988 until he was named Vice President of
Research and Dean of the Graduate School in 1999. “His work helped bridge the gap between the
University of Florida and the business community,” said Day. “We could not have done this without him.”
Contact
Jane Muir, jmuir@ufl.edu